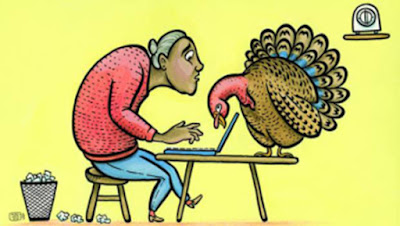 A vote of approval for the October 19, 2017 minutes were first given by KATHERINE FLOTZ and then seconded by REBECCA JUERGENS.

SHARON PALMERI mentioned the December 6th Christmas Banquet at Avalon Manor and reminded the members to bring their books that they wished to sell, there would be a special table set up for this purpose.

ADAM SEDIA mentioned that he was in the process of submitting his latest work, a  novel called  The Last Sparrow to publishers .

DAVE WILGUS mentioned that the 5th Annual Local Authors Book Fair would be held at the Merrillville Library on December 2, 20l7 from 1-4 P.M.  There would be a fee of $25 for book sales on the main level and a fee of $15 for the lower level meeting room.

BEVERLY STANISLAWSKI stated after entering the Indiana Poetry Contest she had taken 2nd place for her poem, “Cross Words.”  She also had taken 3rd place for “Comes Spring,” 3rd place for “One Cool Morning,” and H.M. for “Reflection” and “Hidden Strength.”  Way to go Bev.

REBECCA JUERGENS mentioned that she has now completed her novel, “Angelic Arms,” and will soon have it published by Create Space.

HARDARSHAN VALIA read his four scenes from a stage play entitled, “A Scene at the Poetry Recital Venue.”  This was inspired by the Highland poetry recital that had been canceled due to rain.   The scenes he had written also revealed a photo of the murals on display, taken by Hardarshan as he sat in his car hoping the rain would end and the recital would begin.

KATHERINE FLOTZ read her one page story entitled, “Christmas and Scrambled Eggs.”  The story told of a true event, which happened to her late husband, George Flotz, when he had traveled from Germany as a child with his family.  After landing in New York Harbor, they were taken to a chicken farm in Freehold, New Jersey.  It was Christmas Eve and after introducing themselves, they were served chicken soup and crackers with scrambled eggs as their Christmas Dinner.

REBECCA JUERGENS read a page from Chapter 23 of her novel, Angelic Arms.  After desperately searching for Evan, a man who had rescued her, Kara finally finds him.  When she asks him about the darkness from which she was rescued, and why no one could see him but her, she received no reply.

SHARON BUCKMAN read her two-page screenplay, “The Right to Shut Up.”  The play, which required three members to play the parts, told of an ambitious resident of a small subdivision bossily trying to begin a homeowner’s association.  After introducing herself, she manages to insult almost every homeowner there but gets her just reward after swallowing a bee with her cookie.

BEVERLY STANISLAWSKI read three of her poems.  The first poem, “Nature’s Play,” was a three stanza Dorsimba poem telling of a thunderstorm, a gentle rain and an owl who got no response from his who, who.  The second poem, a rhyming quatrain entitled, “Family in My Home Town,” was a five-stanza poem, which ended with the line, “For family is my home town.” The third poem, a free verse entitled, “Something Blue,” told of a young bride wondered how her grandmother felt on her wedding day. She then took her grandmother’s scarf and placed it on her head in place of the veil.

GAIL GALVAN read her nine-stanza free verse poem entitled, “Hollywood Lovers in L.A.”  The poem was written in response to the movie, “La La Land,” and in rhythm to the music from the movie, tells of the loss of their true love but how” two dreamers kept dreaming and lived out their lives.”

DAVE WILGUS shared a poem written by a friend, DIANA RUSSELL. She wrote a nineteen-line cuplet poem entitled, “Scenes of Bridgton.” The poem tells of a covered bridge festival with happy children playing and the wondering tourists as they listen to the dulcimers playing and blacksmith’s hammering.