NEWS:
l. Sharon Palmeri stated she has been going through her old memoirs and trying to get them organized into book form. She is also working on the idea of a book binder for WOH members.
The binder would contain a few series of poems, short stories, etc., donated by each member.

2. John Boufis has been going through his old writings and recently found one that he had forgot he had written. It was a pleasant surprise.

3. Janice Lewis, a new guest from Hobart, stated she would like to write a book containing her memoirs. She was attending today’s meeting to hopefully get some ideas.

4. Sandra Nantuis, who enjoys writing poetry, stated she attended Sharon Palmeri's non-fiction writing class.
She has worked for the Lowell newspaper and is presently taking a short hiatus so that she might improve her other writing skills.

5. Cathy Dziubla has been doing some writing on articles that have special meaning for her.

6. Beverly Stanislawski stated she has won another prize for her original octetra poem, a style she created. She is an inspiration for all of us to keep trying.

7. Kathy Flotz has just returned from a four day trip with her husband and is now enjoying a little rest and relaxation. This includes a little backyard bird watching.

8. Sharon Buckman just returned from a five day camping trip with her husband. Though she wasn't able to do any writing she enjoyed the much needed relaxation and was able to do some reading.

9. Cynthia Echterling, who enjoys writing science fiction, stated she has written a book which is soon to be published online by Whiskey Creek Press. The book, "Help Wanted Humans - No Experience Necessary," is to published in two sections.

SANDRA NANTAIS read a true short story entitled, "Streetwise". The story told of her trip to Chicago, exiting at Millennium Station and heading to Michigan Avenue, a trip she routinely makes. She encounters a number of homeless people, stopping to talk to some of her favorites and always purchasing a Streetwise magazine, a magazine that is published to help the homeless by its proceeds.

CATHY DZIUBLA read an article she had written entitled "It Could Be A Chemical Imbalance." The article concerned the complexities of the brain and the actual problem of diagnosing and treating homosexuality. Her article inspired conversation among the members as to possible reasons.

BEVERLY STANISLAWSKI read her award winning, octetra style poem, entitled, "Dance of Love". The twelve line poem followed all of her own rules and was beautifully written.

KATHY FLOTZ read an article she had written entitled, "Miracle of Birth in Our Backyard." The article was written about the robins nest and the resulting four birds they watched grow and later had to rescue after two of them fell out of the nest.

SHARON BUCKMAN continued with two pages of a new chapter from her book, "Canopy of Leaves." The story tells of the plan for escape of a captured teenager and the amount of endurance required of such a young girl.

CYNTHIA ECHTERLING read a few pages of her new book "Help Wanted - Human, No Experience Necessary". The story tells of a press conference being given by several aliens and the comical misunderstandings between them and the reporters interviewing them.

BARBARA FUNKE read her free verse poem, "Wind Farms Capital." Her award winning poem concerned the Mohave Wind Farms and had been entered in a social and political contest. 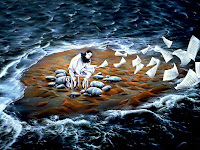 NEWS:
1. Jackie Huppenthal has been spending most of her time on creating illustrations for her children’s book Sallie Mae and the Three Little Wolves, a fractured fairy tale based on the Three Little Pigs story. She shared some of her watercolor illustrations. She is distantly related to Joanne Worley who is from Hammond.

2. Cynthia Echterling, our guest from Lowell, has a science fiction book being published by Whiskey Creek Press that will be out in January. The story centers on the main character an ordinary kid from Hammond who gets a job as an interpreter for a group of aliens. The original book was over 100,000 words so the publisher broke it down into two books. She is working on a sequel.

3. Tom Spencer is writing and enjoying it. He reminded everyone that there is an Open Microphone Round Robin taking place May 14th at the Hebron Comfort Inn. The North West Indiana Poetry Society sponsors this event. On the 15th of May a morning event will have a keynote speaker who will speak on the topic of poetry in education. At 1:00 P.M. on the 15th, at the Lowell Library, a visit with Emily Dickinson will take place. An actor will portray Emily Dickinson. He encourages all to come and enjoy the events. Tom would like to put together a group to go to the Shakespeare festival in Stratford, Toronto Canada next April. He surveyed the group for interest. Several people were interested.

4. Sharon Nantuis, another guest from Lowell, had worked for the Lowell newspaper but had taken a 1.5-year hiatus from the job. She took Sharon Palmeri’s Non-Fiction writing class to get back in touch with her writing and to become more creative with the writing. She enjoys writing poetry. In the future, she hopes to use her father’s letters from Korea as a basis for a book.

5. Beverly Stanislawski who enjoys writing poetry and short stories has won another prize. This one is from the state of Alabama. She created an original poetic style, an octatetra, and won the 1st place prize. In addition, she took 3rd place for a Japanese Haiku submitted in another division of the contest. Look for an announcement of her awards in the Post Tribune. She is working on a poem inspired by a phrase from a Psalm: “Night pregnant with evil”.

6. George Miga who has been to Sharkespeare’s home in the original Stratford upon Avon, lectures at IUN and does training a Valpo. Retired from Amoco, he likes to build on the writing he did in the course of his work life by creating works of fiction. On opus, about Grant and Lee was published by Publish America about 20 years ago. He continues to work on Spin Doctors and Grey Guerillas (about 50% done.) He shared an adventure with us about flying during a tornado.

7. Anthony Dixon, our guest from Lake Station, is interested in filmmaking and trained at Columbia College for a short while. He is interested in screen writing and writing for children. The genres he prefers western and science fiction writing genres.

8. Judy Whitcomb has been busy writing non-fiction for her work and not Sharon’s class.

9. Sharon is eager to take a little break after her non-fiction class and get out in her garden. She said the children’s writing project for IWC will be piloted in Crown Point. She has been busy with researching grant opportunities for the children’s project. She enjoys all types of writing but is currently focusing on poetry and memoirs. She suggested that WOH put together a book of their works. Tom offered suggestions since a group he is connected with did that. Submissions would be limited, 5 poems or short story(ies) under 3000 words (Multiple short stories if total words did not exceed the limit.) Tentative deadlines for submissions would be September 15th with October 1st as the final. The project is still on the table for discussion.

JACKIE HUPPENTHAL shared a “seeing poem” with us. The poet, Robert Froman, used the words of the poems to form a light bulb. She presented her poem, about hot springs. The words floated and were anchored over a picture she took on her honeymoon.

JUDY WHITCOMB read her poem I Heard a Child that embodies her journey through teaching. Tom corrected a preposition.

SANDRA NANTUIS presented a Villanelle poem New Orleans. A photo that inspired the poem accompanied it. Sandra took the picture in New Orleans and thought the picture itself was poetry. The poem captures the image of a young man playing the guitar in a doorway.

TOM SPENCER provided us with two versions of the same poem. The poem captures the terrifying approach of and devastation caused by a tornado. Most felt the second format suited the poem better.

BEVERLY STANISLAWSKI, after reading her daily paper, was inspired to write Hate Is Like a Boomerang. The poem cautions us against the use of hate because eventually it will come back to you.