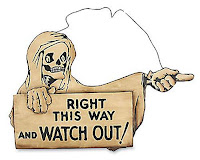 l. Beverly Stanislawski told of her car accident which had occurred on her way to the last Write On Hoosiers meeting. Her car took most of the bruising.

2. Sharon Buckman stated she had just returned from a camping trip with her husband and friends to find a new laptop computer laying on her dining room table, a belated birthday present from her husband.

3. Kathy Flotz will be attending another speaking engagement at Purdue University concerning her book, Pebble in My Shoe. She will also attend another one at a Rensselaer Middle School where she has already sold forty books.

4. Judy Whitcomb has attended the Indiana Writers’ Consortium and stated the organization received a grant in the amount of approx. $l600 from the Crown Point Community Foundation for a pilot children’s poetry project POPP (Power of Poetry Project.

5. George Miga attended two schools for the handicapped, IDTC, in Lafayette and Indianapolis, to help start a crisis management program.

7. Laurie Chase stated she has just had both parents in the hospital with a death of another family member at the same time. Both parents are now doing better.

8. Sandy Nantais attended Autumn Days in Lowell as well as a fine arts show in Illinois. She stated it was a great day, however, it was followed by a GPS adventure that wasn't so great. To top it all off she lost her cat.

9. Lisa Groszek stated she has been working with her students on a project for National Writing Month. She also lost her cat, must be that time of year.

10. Jackie Huppenthal has been busy with her two boys starting basketball, and she has been teaching tumbling to preschoolers as well as coaching toddler soccer.

11. Kathy Dziubla said that she was continuing with writing her children’s book, and also encouraged all of us to "get out and vote."

12. Sharon Jesik has been writing some poetry after attending Tom's poetry classes.

13. Kelley Chase stated she hasn't had much time to write due to homework.

14. Pam Gonzalez also has had little time to write due to her work schedule.

15. Sharon Palmeri has been busy with the Indiana Writers' Consortium’s Children’s Project, as well as helping the Hobart Alumni Assn. obtain tax exempt status and also working on her high school reunion committee. She has completed the last of six workshops she attended sponsored by the Legacy Foundation. The workshops dealt information on strategy, clarity of purpose, fund-raising, roles, accountability, and resources for the not for profit organization. With all of these commitments she had no time for writing anything for tonight.

SHARON JESIK read four pages of her book, Corn Dancer. In this part of the story the friends of deceased Dotty have entered her house to find her paintings hung upside down as well as other items weirdly misplaced.

SHARON BUCKMAN continued with "Escape," the last chapter of her book. In this chapter the young girl, trying to escape her captor, flees through wooded terrain in the hills of Kentucky with her captor not far behind.

KATHY FLOTZ continued with Chapter Two of her new book, The Journey. This part of the story relates to the mother's remembrance of taking in an American flyer near the end of World War II and hiding him in their home during the Christmas holiday.

BEVERLY STANISLAWSKI read her poem, Do Not Cry About a Broken Heart. The four stanza poem tells of the pain of a broken heart that is presently in despair but can someday bring joy again after it has repaired.

LISA GROSZEK continued with her "untitled story," which concerned a spirit named Dominic trying to warn his ex-wife and others of the impending danger by the things he types on a computer screen.

JACKIE HUPPENTHAL wrote a free verse poem about her feelings after being betrayed by a good friend.

SANDY NANTAIS read her five stanza poem, "Purgatory." The poem, complete with pictures, tells of the "sad souls shifting between truth, disbelief, hope and despair," in a cemetery locking them behind iron gates.

LAURIE CHASE continued with her book, "Dual Heritage." The story tells of the difficulty of Dr. Togalaz, an Allizorn physician, getting along with other races, specifically humans, on board the ship she has been assigned to.

KELLY CHASE read a story, untitled at the moment, concerning a boyfriend caught kissing another girl. The girlfriend wishes a tragic accident upon the "other girl" which soon became a reality. 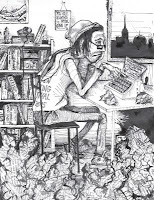 News
Sharon Palmeri opened the meeting showing the Hosier Horizon cover design. Tom Spencer also distributed proofs of some writings for the magazine for the authors to edit. Today was the last day to submit entries. The magazines will cost approximately $6 each. Sharon needs to know the number of copies members want so printing can proceed. Please give her your order soon. She also passed out release forms for all magazine writers to sign.

Tom Spencer will be a guest speaker at the Ohio Poetry Day, Oct. 15-16. His P.O.V. (point of view) writing presented an interesting way to recognize and to enjoy a story with omniscient point of view.

Sandra Nantais will be a vender for Fall Fest in Lowell, featuring photography. “The Crazy Cat Lady” taught us all about some felines, including beautiful color photos.

Judy Whitcomb shared some concerns about her daughter’s surgery. Her “Nonie’s Revenge” offering showed just how involved and emotional dog owners can become. We laughed through most of her reading.

Lisa Groszek told about having a book signing of Lonesome Isle at Mellowbrew Cheesecake House. Lisa kept us wondering if her untitled book character Dominic was really alive or dead. The mystery continues….

Cathy Dziubla has been traveling and writing two more chapters of her book.

Kathy Flotz spoke at Lowell and Wheatfield libraries, sold more of her Pebble in My Shoe books, and made some connections for additional talks.
Pam Gonzalez has been busy working and writing submissions for Hoosier Horizons.
Mike Musak is still looking for more information about writing/submitting screen plays.
His humorous play, The Bar, gave three of our men an opportunity to “ham it up” as they read the parts.

Laurie Chase spent some time editing her book and correcting car troubles. She gave an “Evelyn Wood’s speed reading of her selection from Dual Heritage, featuring her protagonist who is half human and half Allizorn.

Beverly Stanislawski reported winning two HM in Ohio’s Poetry Day contest and several awards in the Poetry Society of Tennessee competition, including a second, third, and 5 HM’s. Her short story, ”The Friendly Card Game” told of some humorous happenings between friends at a bridge game.

Kelly Chase (minus her braces and with new red hair) kept us in suspense wondering if her characters Ranee or Nicole, from Unintentional Treasure Hunting would keep the jewels, especially that beautiful ruby ring.
Sharon Jesik spends time writing, working, and editing. Her reading, from Corn Dancer, with its marvelous descriptions and narration, caught us up in a death investigation involving Luck and Cinda.

Sharon Palmeri is busy as ever with teaching, writing, and helping with Hoosier Horizon plans. She offered “Sign of the Times” from a prompt that asked one to pick any book, turn to page 56, go down 5 lines and write the first full sentence as the first sentence of your new story. Her offering had us guessing just what time it was and what would happen to our hero and his “computer” friend.

John Cotey spends time writing and in his extra job. “Do I Look Bald in This” was his humorous reading which told of his attempts to emulate one of his childhood heroes, Han Solo, and the reactions from his sisters and others to his choice of fashions.
Liz Wilson working on completing the last draft of her urban fantasy novel. Her offering, “Bottomside,” was quite “electrifying” as one character Hadrian lit up like a Christmas tree as he felt the effects of the “spell.” Good background about Chicago in the tale, too.

George Miga continues to work on three novels and search for agents and publishers. He also told us about a Writer Beware list of bad agents he had found.
Posted by Write-On Hoosiers, Inc. at Saturday, October 09, 2010 No comments: