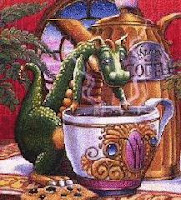 NOTE: Coffee and cookies are now being served at WOH meetings. Unfortunately the cute little dragon (above) has not appeared at any meetings -- yet!

1. LIZ WILSON stated she has been trying to get new story ideas as well as looking for an agent.

2. JOHN COTEY, an art teacher, has just finished up his paperwork for the school year and hasn't had an opportunity to do any writing yet.

3. MICHELLE BASS stated she has been doing some writing off and on since she last attended one of our meetings. In the past she has written five screen plays, two completed, and an article published in an art magazine entitled Midwest Edge.

4. SHARON DORELLI stated that since she last attended a meeting she had become engaged and then lost her fiancée to cancer. She felt she was ready to try and refocus her life again and get back to writing.

5. SHARON JESIK told about seeing her friend, Christa Foust, author of Snakes on a Plane. She also told of a cute phrase she had heard, "When in doubt have a man come through the door with a gun in his hand."

6. DONNA DOUGLASS stated she is going back to Atlanta for a couple of months but when returning she plans on coming back to our meetings again.

7. RON TRIGG gave us a quick summary of his past writing adventures. He stated he has been writing all of his life, mostly for various magazines as well as working with various memoir groups and about his experiences in Africa.

8. NEIL BEDEKER told us he applied for a copyright for his latest novel and brought along a copy of it.

9. BEVERLY STANISLAWSKI has returned to her poetry writing as well as taking a friend for chemo therapy.
10. JANE BURNS has been editing and revising her novel as well as struggling to get back into regular writing.

11. KELLY CHASE has been working on her short story now that she has completed her school year.

12. LAURIE CHASE, who was unable to attend our last meeting due to illness and the death of her mother (and Kelly’s grandmother), has now returned to her writing.

13. PAM GONZALEZ has been working on a book cover for a possible children's book. She has asked a friend for commercial rights to her art work for the intent of self publishing.

14. GEORGE MIGA stated he hasn't been able to do much work on his book, Medal of Dishonor, due to his first priority "kids and grandkids."

15. SHARON BUCKMAN stated she mistakenly thought she would be working on her novel while going to down to their fishing cabin - her computer wouldn't let her do any editing so no writing was accomplished.

16. SHARON PALMERI stated she has been busy writing "publicity stuff," articles for the BrickieFest and the Times, etc. She also told a cute story about how her metaphors and similes on “how to write and edit” she teaches in her writing classes have lately been interfering with her cleaning of the china cabinet: she found things that don't belong and an abundance of clutter, etc.

NEIL BEDEKER read his short story, "That Autumn Night." The story told of a traveling circus coming into town and attending it with a friend named Billy. Billy, a friend with some mental handicaps but strong in physical structure, was asked to help out. That was the last he saw of his friend until attending the evening performance the next day with his parents. His friend was working there.

LAURIE CHASE continued with her novel, "Fast Forward." In this continuation Kelly, a mother transported 500 yrs. into the future, struggles with finding a way to keep from missing her home and family. She finds that keeping herself busy cleaning and organizing the ship she is on helps.

KELLY CHASE read the continuation of her story "The Ring." After fearing that there was something very wrong with the magic ring she had found, she decided to leave it at home so as not to be tempted in using it that day. When going to the library to try and find some type of an article that would help her she discovered the librarian somehow knew exactly what she was looking for.

LIZ WILSON read the completion of her mystery story, "Hindsight." After running away from her Vietnam veteran husband, Frannie discovers all types of mysterious things happening to her as she drives down a dark, rain-soaked highway. Trying to retrieve a cigarette, she looks up in time to see a woman standing in the road before her. The ending leaves it up to the reader to draw their own conclusions.

KATHY FLOTZ continues with her newest novel, "The Journey." This part of the story takes the reader back to Germany after the end of World War II, and to a passenger train departing its
passengers at a small German town. A man with "tear-filled eyes" watches through the window as another man is reunited with his family and wishing it could be him.

SHARON JESIK read more of her novel, "Corn Dancer." Deceased Dotty's friends continue their search for the reason of their friend's death. They don't believe that their friend was murdered by another spirit but instead try to decide who would benefit the most from her death and keep trying to decipher the various mysterious happenings around them.

JANE BURNS read a short memoir of her trip to Disney World with her family, remembering all the beautiful scenes and happenings through her eyes as a child. The story ends with her close call in an almost fatal drowning accident and being saved by a stranger.

DONNA DOUGLASS read a memoir of her life with her father, telling of their closeness and similarities. Her father, previously working at a Sheet and Tin Mill, later took some college courses and graduated with her, causing a feature article to be written about them in the Gary Post Tribune.

GEORGE MIGA continued with his novel, "Medal of Dishonor." This part of the novel starts with Oliver Crawford being called into President Johnson's office prior to the announcement of his new appointment. He is instructed of his new duties that the President expects of him in the "not so tame language" only President Johnson could use.

Katherine Flotz stated that Laurie Chase was hospitalized this past week for heart problems. Laurie has also lost both of her parents within the past two months. Our hearts go out to her and Kelly during this difficult time. Kathy also reminded us of the picnic, hosted by Tom Spencer for the Indiana Writers' Consortium, on June 25th.

1. KATHY FLOTZ told us of her speaking engagement at Beecher Junior High School in May and its wonderful outcome. The story was posted in the Beecher Herald and one of its readers remembered a story her mother had told who had a similar experience in Germany. Kathy and the mother will be having lunch together on Friday.

2. CATHY DZIUBLA stated that she recently finished her book, "Sean O'Hara and the Leprechauns."

3. SHARON JESIK stated she has a friend that has been working with her on trying to find an agent.

4. JANE BURNS has been busy writing poetry and investigating her new interest in film making.

5. PAMELA GONZALEZ stated she hasn't had much time lately for writing due to her very busy schedule at home and work.

6. TOM SPENCER stated the State Federation of Poetry meeting went very well and the Lowell High School did a superb job with their Shakespearean play. He also reminded us to bring $5.00 when coming to the June 25th picnic at his house.

7. SANDY NANTAIS stated she enjoyed the spring poetry meeting but wished she had been invite to read her poetry. She also stated she is joining with Tom in volunteering with the public school system for poetry awareness in the lower grades.

8. DONNA DOUGLASS has been busy writing her memoirs and intends to read one of them at tonight’s meeting.

9. GEORGE MIGA is still working on editing his book, "Medal of Dishonor."

10. SHARON BUCKMAN stated she has added another chapter to her book, "Canopy of Leaves."

11. NEIL BEDEKER stated he hasn't been able to do much writing lately due to a computer virus.

12. JESSICA BARD has been busy working on her newest poem, "In The Wake."

CATHY DZIUBLA read a very cute short article entitled, "I Don't Like Pancakes Anymore." It started off with the sudden discovery she no longer liked pancakes or waffles, instead she opted for a "thick slab of cold meatloaf along with some green olives stuffed with garlic on the side." Oh well...

SHARON JESIK continued reading her novel, "Corn Dancer." In this part of the story the friends of deceased Doty discuss their ideas of who her killer might be.

JANE BURNS read her eleven stanza gothic poem entitled, "The Secret Lies with Charlotte." The poem tells of a girl named Charlotte hiding in the nighttime silence of the library and ends with the destruction of the library (and Charlotte) caused by fire.

TOM SPENCER brought his sonnet entitled, "From the Wounds of Time." The four stanza poem relates the uselessness of mourning death instead of enjoying life.

DONNA DOUGLASS read her recent memoir concerning her heartbreaking divorce several years prior. The memoir, entitled "A Late Lunch," told of how she had met her husband of thirty years and how much she had loved him, despite their opposite personalities.

GEORGE MIGA continued with his novel, "Medal of Dishonor." In this part of his novel he told of McCall's relationship with a newspaper journalist who was working on the Cordell Jackson story. She and McCall discuss the shooting as well as McCall's problems with his son.

JESSICA BARD read her six stanza form poem entitled, "In The Wake." The poem relates the useless feeling of the poet as "The world meets in a senseless time of twilight."

SHARON BUCKMAN introduced a new character into her book entitled, Canopy of Leaves." This part of the story told of Tom's father, whom he hadn't seen since childhood, coming back to the area. The chapter ends with the murder of the father.

SANDY NANTAIS read her two page poem (prose) entitled, "Stray Pit." The poem tells of a runaway Pit Bull following her home and her fear of him even though the gentle dog seemed very lovable.

KATHY FLOTZ continued with her novel, "The Journey." In this part of her novel she tells of Martha Brenner and her family coming to America from war torn Germany in l949. She and her family find the Wilson family very hospitable and seem to enjoy their new lives.