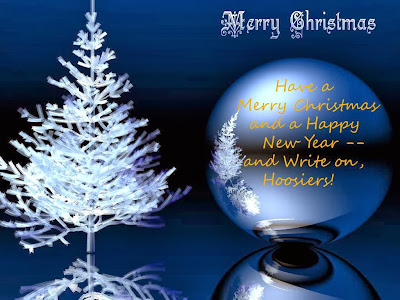 
OLD BUSINESS:
A vote of approval for the minutes of November 6, 2013 was given by BEVERLY STANISLAWSKI and KATHERINE FLOTZ.
NEW BUSINESS:


SHARON PALMERI announced that a total of 64 people should be attending the 25th Anniversary Christmas Party of WOH;  Sharon also announced that the Hoosier Horizon magazine has been sent to the printers.  The members were also reminded that they should have a note accompanying the book they bring for the gift exchange stating why they liked this particular book.


MICHELLE MC GILL-VARGAS announced that her flash fiction story, “A Better Place,” will be published in the March 2014 issue of "Splickety " magazine.

JULIE PERKINS stated that she would like to recommend the  book Prayer Journal  written by Flannery O’connor.

SHARON DORELLI read her beautiful eight stanza poem entitled, “Soul Mates.”  The poem tells of the connection between an author and an admirer that relates to her writings.

JUDITH  LACHANCE-WHITCOMB read two pages of her children’s story entitled, A Whirlwind and a Princess.  The story told of a lonesome princess named Guenever who encountered a young whirlwind of a girl named Emma who literally knocked her off her feet, only to be accidentally knocked down again as she tried to regain her balance.

LAURIE CHASE read four pages of the first chapter of her newest novel entitled  Infiltration Agent.  The chapter, entitled,  “ A Rude Awakening,” began with Agent Kaara awakening out of a coma to find that she was a different person, with different surroundings, than the person she remembered being; other agents began trying to explain to her who she really was.

ART WILKERSON read his short comical article entitled, “Questions I Have Been Afraid to Answer, For Out of the Mouths of Children Comes Embarrassment.”  The article proceeded to tell of eleven of these questions, such as: Mr. Minister – Why did King Solomon need 300 combines?

GEORGE MIGA continued with his short story entitled, “The Other Man.”  The story, written eight years prior, told of a Japanese airman, who had been hiding in the New Guinea jungle following the end of World War 11.  After finding, repairing and eventually flying off of the Island with the intent of bombing an Allied cargo ship, he eventually landed his beloved Zero in northeast New Guinea.

DONNA DOUGLASS remembers Nov. 22, 1963, the day John Kennedy was assassinated, as the turning point in her life, from a time of innocence to a time of a less peaceful existence.  As a college freshman, she remembers the horror of that Friday, and watching the first live murder on  TV the following Sunday when Jack Ruby killed Lee Harvey Oswald.

BEVERLY STANISLAWSKI read her eight stanza poem entitled, “The Real Thanksgiving Feast.”  Beverly’s poem relayed what she felt was the real feast for that day, not turkey but seafood since the colonists lived close to the sea.

AUDREY WARZYNIAK continued with the second half of her short story entitled, “Return Memories.”  The story continues with Maggie’s friends opening the gifts she had wrapped for them before her untimely death, gifts that had them all to remembering the things Maggie had never returned to them before.

JULIE PERKINS continued with her short story entitled, “Dead Ashley.”  In this part of her story, Marguerite, still wearing the clothes she had been married in that morning, runs into her former boyfriend’s sister in the grocery store.  She finds out that the wife of her ex-boyfriend had been killed in a car accident that morning, the accident that had placed her new husband in the hospital.

KELLY CHASE continued with her story, “Stolen.”  After following the older man into his very expensive jet, young Cathy finally begins to ask him some questions, such as, “why he had picked her up in a very expensive custom made car, bullet proof glass and all?”

MICHELLE VARGAS read her story entitled, “What Steel Hath Wrought.”  The story tells of a young girl, forcibly married to an older man, trying to kill him on their wedding night.  After hitting him over the head with a kerosene lamp the bedroom catches fire, sending her out into the night and into a cotton field.

MIKE MUSAK read his query letter to a prospective agent for his screenplay entitled, “The Plant.”  In the query letter Mike tells of his 23,000 word comedy screenplay and his experiences from his last several jobs which had provided the inspiration for it.