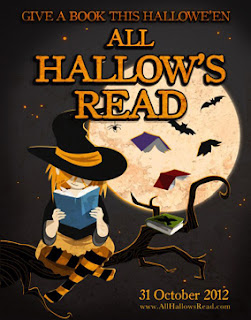 OLD BUSINESS:
Vote of approval for the last meeting was first given by SHARON BUCKMAN and seconded by BEVERLY STANISLAWSKI.

SHARON PALMERI told the members that a slide show of past meetings had been added to our blog; she encouraged the members to check it out when they were reviewing the minutes.

JANE BURNS brought a brochure entitled “Poetry in the Park,” which pertained to the Sat., Oct. 20th poetry reading at the Evergreen Park in Lowell.  The general public is invited to attend, 10 A.M.  The meeting is sponsored by the North West Indiana Poetry Society; if you write poetry you are invited to join in.

BEVERLY STANISLAWSKI read her six stanza poem entitled “BEWARE, THE BUBBA YUGGA.”  Beverly explained that a Bubba Yugga is the polish version of a witch; along with her very scary poem she also brought a cardboard cutout of a scary Bubba Yugga.

RON TRIGG read four pages of his INTRODUCTION of AFRICAN MEMOIRS.  Ron describes how he became enticed with African landscape and culture, a passion that only seemed to grow as he got older, eventually taking him on a very “adventurous agenda.”

JANE BURNS continued with chapter 8: “That Crippling Fever,” from her novel, ATALANTA.  After enduring a very hot midsummer, Melissa announced that the sisterhood would be going on an excursion to the lowlands.  The maidens were forced to carry very heavy equipment through the southern foothills, adding to their already very hot tempers.  After finally coming to a swollen river, they ended their ritual with “gliding into the murky water” and enjoying the end of the day.

MICHELLE VARGAS read four pages of her novel, STRIVING AFTER WIND.  This part of her novel began with Adam, a security guard for the Tolleston Gun Club, finally getting to see and hold his son Landon.  After “Gammaw” hands her grandson to him she begins to berate Adam for not spending enough time at home.  The story ended with planting suspicion of what his wife was actually doing in Chicago.

LAURIE CHASE continued with her novel, BADRADIN.  As her novel continued, Major Zon, after having Dr. Togalaz confined to her room, continued with his investigation of the “disturbance” which had occurred in the ship’s lounge and involved Dr. Togalaz and one of Major  Kyntook’s guards, Mr. Uzok.  The story ended with Mr. Uzok being confined to his quarters for the rest of the trip.

SANDRA NANTAIS brought her one stanza acrostic poem, entitled “NIPPY,” written at the top of a beautiful picture of a winter scene taken at the Buckley Homestead in Lowell.

JACKIE HUPPENTHAL  read her four stanza poem entitled, “CLINGY TWISTER.”  Her poem, also written on the same page of a photograph revealing two different versions of a pumpkin vine, compared  the twisting of the vines to the “depths of my strained mind.”

JULIE PERKINS read the four page ending of her short story, “ONE NIGHT STAND.”  Her story ended with Rachel, a pregnant woman who had been forced to stay at a hotel with Nevaeh, a prostitute ,and deciding to leave with the husband who had abandoned her; she had been unsuccessful in trying to persuade Nevaeh to come with her and leave her life of prostitution. 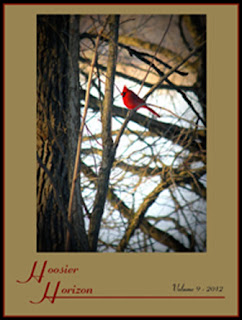 OLD BUSINESS
The vote of approval for the last meeting’s minutes was first given by Jane Burns and seconded by George Miga.


NEW BUSINESS
The group voted on a photograph to use for the cover of the next edition of Hoosier Horizon Magazine. It was tough because there many beautiful entries, but first place went to Jackie Huppenthal, a winter scene which included a pose from our state bird, the Cardinal.

Beverly Stanislawski announced that she won a few state poetry contest awards:  one honorable mention in Kentucky—in Michigan, a Haiku series to be published in the Poetry Society of Michigan Magazine which included first and second places and one honorable mention.   In the Massachusetts’ contest, she placed several times, including a first, two seconds and a third place with her poetry category entries.

SHARON PALMERI reminded everyone that the Christmas party this year will be on December 6th, the first Thursday of December, and the cost is $23.00 per person. Payments  must be in by November 21.  Sharon also clarified some formatting guidelines regarding entries for the magazine which are now posted.  (One mention, poems work better single-spaced.) Last year’s cost of the Hoosier Horizon Magazine will be approximately $6.00 and expected not to be much different (if at all) this year. All authors are expected to purchase four copies each.

TOM SPENCER gave handouts to members regarding two upcoming literary events:  Saturday, October 13th, a poetry open microphone session at the library in Lowell from 6:00 to 9:00 p.m. and Poetry in the Park on Saturday, October 20th at Evergreen Park in Lowell.  Call 1-219-696-3338 for more information.

GAIL GALVAN mentioned that she continues to work on revisions, a second draft, of the story titled New Jack Rabbit City: Starring the Chicago Hares.
READINGS

MICHELLE VARGAS
Michelle started the evening off by reading from chapter two of her novel, Striving After Wind. In this chapter, Rebecca continues to convey her dismay at leaving Chicago, and the frustration with her husband and living in a different town.  Adam continues to complain about his new bride and wants to see his son Landon.

JANE BURNS
Jane continued her story about Atalanta and read from chapter seven:  “All Acts of
Love and Pleasure.”  The Sisterhood has gathered inside the Great Hall to feast. Conversation turns to the nature of gods, stories, and nature.  Kyra insists that anyone can tell a better story than Laurel.  Atalanta is taunted as she climbs onto a table and speaks. Yet, she is the one who gets “thunderess cheers” from the others.

LIZ WILSON
Liz read the prologue from her novel titled Bottomside. Though the story takes place in modern day Chicago, the prologue is set on the British Isle of Anglesey in 60 AD. The Romans are nearly ashore.  Myrddin vows that his people will “triumph and drive back those who would destroy the old earthen way of life.”

CAROL CASTANEDA
Carol read from her short story, “True Lies,” which introduces two characters, Mack and Michelle.  Married for four years, Mack hates Chicago and can’t wait until the two of them can board a flight out of town to Ft. Lauderdale, Florida. A car accident happens instead when Mack hits a patch of black ice on the road.

KELLY CHASE/LAURIE CHASE
Kelly’s mom, Laurie, read for her since Kelly had a case of laryngitis.  The story of The Ring continued with the end of chapter eight and into chapter nine.  In this chapter, Kristine and Jesse take off and leave the ritual that involves a “poor baby goat” behind.  The ring is being silent.  Kristine is afraid the Mistress will follow them.  Although they’ve only know each other for a couple of hours, two kisses are exchanged.

NEIL BEDEKER
Neil read from his novel, Dark Hearts, White City, from chapter seven, “The Trouble with Love.”  He continued telling his story, which takes place in Chicago. The time period is 1893, during the World’s Fair.  Officers Bockleman and McGhan are sitting on bar stools at Kelsey’s saloon on Halstead speaking to each other with their Irish way with words.  They spot Willy the Lump who is headed for the back door.   As “Willie” is patted down, the officers find a dozen small packets of chloral hydrate.  They tell Willie, he’d better start talking and give up the name of who he got the stuff from.

GEORGE MIGA
George read more from his novel Medal of Dishonor which he is revising. In this segment, McCall talks long distance on the phone to President L.B. Johnson.  McCall is in the Middle East and just had a meeting/lunch with King Hussein.  President Johnson tells McCall to go to Israel since Hussein has requested it but says depending on what happens in Israel, McCall might have to return to Jordan.  McCall starts to wonder and asks the President, “Did you send me here to just keep me quiet about the Crawford business?”  (Note:  George stated that some facts are from actual historical records.) He also continues to work on his other story titled Ariela – Lioness of God.
MIKE MUSAK
Mike read a short story titled “Lunch Time.”  It was along the lines of his script writing, but in a different format for submission to this year’s Hoosier Horizon Magazine. At lunch time in the cafeteria, George introduces Jake, a new guy, to some other workers.  Jake sees a fly and swats at it.  Ted, another worker at the table, snatches Jake’s sandwich and smashes the fly on the table with it.  Jake yells, “That was my sandwich.” Ted replies, “It still is, has more meat now.” Workers tell Jake he’ll get used to Ted.

DONNA DOUGLASS
Donna's short story entitled "For What It's Worth" focused on her experience as an R.A. in a freshman dorm on I.U.'s campus in 1970 when social and legal norms were in extreme flux.  One of the girls came to Donna in confusion over sexual activity, now that the birth control pill was readily available and most of her friends were sexually active.  Later, after the girl's mother had stopped her from acquiring the pill, she came back for more counseling because she was now alone, pregnant, and planning to go to a dangerous old man for an illegal abortion.  After much thought, Donna gave her two phone numbers, one for adoption and one for a bus to New York where abortion was safe and legal.  The girl took both numbers but never revealed the choice she had made.

NOTE:  Tom Spencer, Ron Trigg and Julie Perkins volunteered to wait until next time to read due to time constraints. 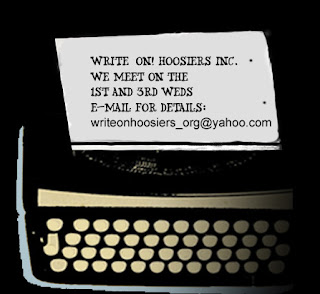