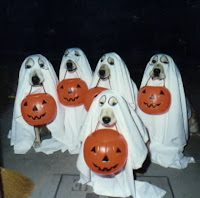 NEWS:
1. BEVERLY STANISLAWSKI stated she is just waiting to hear from some of her poetry entries in various contests and hasn't been doing much writing lately.

2. AUDREY WARZYNIAK brought us some candy to go with our Halloween cookies and was happy to announce that due to one of her children moving out she now has her own office.

3. MICHELLE VARGAS was able to write (in completion) a very realistic Halloween story in 2 1/2 hrs for tonight’s meeting.

4. PAMELA GONZALEZ had started to write a children's story but decided that it would be best suited for adults.

5. JESSICA BARD has been having a difficult time trying to get back into writing and therefore has done very little since her last visit with WOH. She mentioned that her grandfather, also a WOH member, has been under the weather lately -- but she is really hoping to be able to bring him to the Christmas party.

6. KELLY CHASE has been busy working on her novel, "The Ring," and keeping up with her schoolwork.

7. CHARLOTTE BRISLEN informed us that her grandson, who is in his high school’s band, recently took first place in the Washington, D.C. contest.

8. SHARON JESIK has been continuing with work on her novel, "Corn Dancer."

9. JANE BURNS stated she is still busy working and editing her novel, "Atalanta."

10. TOM SPENCER stated he is still waiting for his poem in"Festival of Souls" to be published.

11. TOM MOLNAR had just returned from his trip to Italy three hours before attending our meeting (how's that for stamina). He left the sunshine and warm temperature to come back home on a very chilly, rainy and blustery day - hopefully we picked up his mood.

12. GEORGE MIGA has been busy working on a synopsis for his book, "Medal of Dishonor." He is in the process of trying to find a good publisher.

13. SANDRA NANTAIS has been busy writing poetry and working on a photo shoot the for Valparaiso University Women’s Bowling Team.

14. NEIL BEDEKER stated he is still fighting with his computer (we all understand that one). Neil will also be attending a book signing at a book store in Dyer.

15. SHARON PALMERI stated this past week has not been a very good one for her. After her computer crashed (the one she uses the most) her TV broke. On top of all this she stated her husband hasn't been feeling well this past week. Sharon reminded members to bring a $10, or less, present for the gift exchange at our Christmas Party, Dec. 7th at the Lakes of the Four Seasons Country Club.

16. SHARON BUCKMAN confessed she hasn't done much writing the past couple of weeks, she has been on a camping trip with her husband and friends.

17. LIZ WILSON has been busy working on her novel, "Grindylow."

SHARON BUCKMAN read her Halloween short story entitled, "All Hallows Eve." The story told of a retired couple moving to a small town in southern Ill. and the wife encountering an "intruder" in her husband's absence.

GEORGE MIGA read the synopsis of his novel, "Medal of Dishonor." The synopsis was well received by the members and a few suggested changes were made.

SHARON JESIK stated she has reached the point in her novel, "Corn Dancer," where she is now working on the "uncut" part of it. In this part of her novel, Doty is practicing her ghostly ways on her friends as well as the two sheriff's officers.

BEVERLY STANISLAWSKI read her Halloween story, "One Scary Night, " which tells of a couple of young boys intentions of visiting a "haunted house" to scare the old man and his dog that live there. The story has a very surprising and funny ending.

TOM SPENCER'S nine stanza poem, in conjunction with our Halloween theme, related to "all souls return from hell" and was entitled "The River's Song."

CHARLOTTE BRISLEN read a short memoir entitled, "But Officer." The memoir told of Charlotte, shortly after having received her driver's license, being pulled over by a police car for driving at night without her lights on, making her children believe they were going to jail

AUDREY WARZYNIAK brought along a brochure on tips for writing. These tips also included "having a thick skin" to prepare for all the rejections you will receive and the
discipline that is needed.

MICHELLE VARGAS read her untitled story which told of a Gary, Ind. minister being
murdered on his front porch - parts of her story were based on true happenings back in
the 1900's.

JANE BURNS read her short story entitled, "Fall Colors." The story tells of a woman trying to remember something that had happened to her and had taken place in a canoe; this also involved the drowning of her daughter.

TOM MOLNAR shared his short story entitled, "The Secret in the Woods." The story involved three women going into the woods and beginning a cadence that involved white powder, and dancing in circles to spread the powder. The purpose of all of this was to lose weight.

KELLY CHASE read two pages from her novel, "The Ring." In this part of her story Kristine was involved in an auto accident that she miraculously quickly recovered from due to her ring.

SANDRA NANTAIS read her comical version of how to prepare a "Devil's Food Cake." for your own birthday. The clue to this is she would never eat any of it.

NEIL BEDEKER read the prologue to his story, "Dark Heart, White City." The prologue, placed back in Sept. of 1866, told of two ruffians planning on scaring a younger child named Mudgie.The story ended with the friendless Mudgie turning the tables on the two ruffians.

LIZ WILSON read four pages of her novel, "The Grindylow." The story began with a young woman hitchhiking on a cold winters night along a country road. After being picked up by a truck driver she realized he had other intentions apart from giving her a ride.

1. KELLY CHASE is back in school and it has been taking up most of her time.

2. LAURIE CHASE has a new job but unfortunately, because of the days and hours, she will have to miss her WOH meetings for awhile.

3. JANE BURNS has been busy editing and researching the book she is working on, which she describes as “post-modern narrative and techniques”.

4. SHARON JESIK is back after being gone for couple of weeks and is getting back into writing again.

5. TOM SPENCER didn’t say much about his week but was heard mentioning something about the Cubs :-)

6. SANDRA NANTAIS will be displaying some of her photography in Lowell shortly, and she has been busy helping Tom with the Indiana Poets Society.

7. CHARLOTTE BRISLEN has been busy with work.

8. DONNA DOUGLASS has been enjoying going to the lake to write. She will be traveling to Birmingham, Alabama to visit with her grandson and will be gone for our next meeting. She also attended several classes held at Purdue/Calumet.

9: RON TRIGG was celebrating his birthday today. He’s had many visitors over the past few weeks and has not had much time for writing.

10. SHARON DORELLI has been busy baking cookies to send to her grandchildren and is “cookied out”.

11. BEVERLY STANISLAWSKI has been fighting printer problems but has won another poem contest, this time winning third place.

12. JACKIE HUPPENTHAL has been too busy to write but did attend a presentation by Kathy Flotz at the United Methodist Church in Crown Point on Sept. 23rd.

14. PAMELA GONZALEZ has been busy with work.

15. BRENDA HAVENS has started working on a blog she plans on putting online soon.

15. NEAL BEDEKER has been working on a sequel to his book “The Cassidy Posse”. He also attended a class at Purdue/Calumet on the Chicago World’s Fair as research for his sequel.

16. CAROL CASTANEDA became a member of WOH. She has been doing a little writing and just returned from a trip to Nashville.

17. SHARON PALMERI has been busy going through all the books written by WOH members over the past 22 years. 25 people have published books. She is planning on scanning the covers to put on the WOH website. If any members have had a book published that she can add to the list, she asked that they please let her know.

Also, Sharon suggested members check out www.chicagohumanities.org for things to do around the Chicago area during this beautiful fall season.

Busy working to put together the new Horizons Magazine, Sharon printed up a copy of the artwork for the cover and shared it at the meeting and it looks wonderful. A photo contest was held for the magazine cover and the winning entry was by our very own WOH member, Sandra Nantais.

Sharon announced that Bill Allegrezza from Indiana University posted that they are looking for submissions for Spirits Magazine by IUN. She said he also has a online poetry site (Moria) that accepts submissions.

LAURIE CHASE read “The Character Called Milton”, a story about an incident her father experienced when he served in Korea.

KELLY CHASE continued her story “The Wolf”, about a girl who is bitten by a werewolf.

BRENDA HAVENS shared the opening scenes of a novella, “Pearls” about two characters who, as teenagers, shared an incident on a tropical island. One of the characters, Peter, revisits the place years later.

NEIL BEDEKER continued his short story “Old Fib”, about a farm family working to store hay and the neighbor “Old Fib” who comes to help them.

KATHY FLOTZ continued her story “The Journey” set in post-WWII Europe, about a family separated during the war.

JANE BURNS continued “The Fall Colors”, a story about a woman who meets the Lord and Lady of the Dead.

TOM SPENCER shared his poem “To The Ugly American”, which covered the seven deadly sins.

BEVERLY STANISLAWSKI read her poem “The Luck of Canary Jones”, loosely based on her father. This poem was the 2nd place winner of a contest.

SANDRA NANTAIS read “Vogue or Gatsby? Definitely Chic and Classy”, a poem she wrote about an old family photo of her grandmother.

CHARLOTTE BRISLEN also read a poem, “Fire, Fire, Pants on Fire”, a poem about a fire drill, from the teacher’s perspective.

SHARON DORELLI read her poem “Nightmare” about, well...you guessed it :-)

RON TRIGG read “Four Men in a Hospital Ward”, another chapter from his memoirs “Moments on an African Landscape”, about his time spent in an African hospital ward.

SHARON JESIK continued her story “Corn Dancer”. In this piece, four characters meeting for dinner at dead Dotty’s house enter into conversations about Dotty and the strange things that have surrounded her mysterious death.

DONNA DOUGLASS read “Dessert” from her memoirs, about a wild office party she attended in 1967.

Before the meeting ended a suggestion was made to have next meeting be a spooky or Halloween type theme.