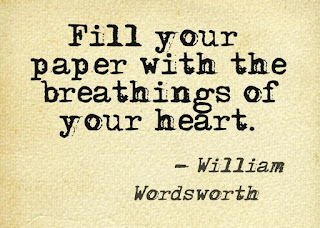 The meeting began at 6PM.


OLD BUSINESS:
A vote of approval for the March 16, 2017 minutes was first given by RUTHANN GRACZYK and seconded by HARDARSHAN VALIA.

SHARON PALMERI reminded the members of her suggestion to try to write a poem each day in honor of Poetry Month.  She also asked the various members to tell what inspired them to write.  MARILYN KESSLER stated that she sometimes found talking to herself would sometimes inspire a poem.  ADAM SEDIA mentioned that he found himself trying to fit various statements into verse.  CAREN VON SEE stated she would create a profile sheet when asked, “What creates good characters.” BOB PHILPOT stated he would go through a list of questions from a character catalogue he found, to establish his characters.
HARDARSHAN VALIA stated he sometimes uses his own persona.

KATHY FLOTZ will be speaking at the Thomas Edison Junior High School on April 12th about her book, Pebble in My Shoe.

HARDARSHAN VALIA talked about one of his favorite authors, Gloria McMillan.  Gloria is a professor at the University of Arizona, originally from East Chicago, In.  She has told how the literary image of Northwest Indiana can be changed by encouraging our literary talents.  She suggests writing on what you know best, and has been seeking stories written by steel workers for her forthcoming book entitled, Children of Steel.  Two of her already published books are, Orbiting Ray Bradbury’s Mars, and Blue Maroon Murder.

ADAM SEDIA read three stanzas from the “Rubaiyat of Omar Khayyam” (translated by Edward FitzGerald).  Adam explained that Rubai is a form of quatrain in Persian poetry, in which lines 1,2, and 4 rhyme, and all verses share the same meter.

RACHEL THOMAS read “Poet’s Tree,” written by Shel Silverstein, a beautiful  one stanza poem beginning with “Underneath the poet tree, Come and rest awhile with me.”

SHARON PALMERI read another beautiful poem entitled, “Seeing the Best.”  The author’s pen name was listed as Patience Strong. The poem was one Palmeri clipped from an Ideals magazine when she was 17 years old.  Members "Googled" to discover Strong's real name was Winifred Emma May, from England.  The poem’s basic message was, “Believe in tomorrow and never despair….”  Sharon also read a poem by W.H. Auden entitled “Musee des Beaux Arts” (translated The Museum of the Arts.) Accompanying the poem was a picture of a painting called “The Fall of Icarus” by artist Pieter Bruegel, because it was referenced in the poem.  Auden explained in the poem that even as life for some people is a disaster, simultaneously others are not affected, or are even experiencing happiness.

CAREN VON SEE first read her poem, “Honor the Wonder.”  The 17 line poem tells of all the various wonderful wonders, such as, “of a morning bird’s song, the warmth of family.”  She leaves to the reader the act of filling in lines of his or her own.  Caren also read “Ice Falls.”  This story was written as a 247 word entry into a Hitchcock March/April contest. The story is a revision of the story she read at the last meeting telling of a person  flying to Switzerland to enter an Ice Fall Competition with his equipment manager.  Not listening to his own instincts, his rope failed as he leaped over the edge.

ADAM SEDIA read two poems, the first, “The Void,” was written for a close friend who died a few weeks before.  The last line read, “For all my powers massed will not suffice to fill the void.”  The second poem, “Regret,” an Italian sonnet, tries to answer the question, “You ask if I have something I regret.”

KATHERINE FLOTZ brought her Diamante (diamond shaped) poem telling of the birth of her first great-grandchild and ends with, “Thank you God, Samara, Love You.”

HARDARSHAN VALIA read his three-stanza poem entitled, “Why Do I Write.”  The reason is best described in the first stanza, “I write because all your life you wrote for me.”

BEVERLY STANISLAWSKI  brought two poems. The first, a Shakespearian sonnet entitled, Creative Juices, tells of all the work involved to be creative and ends with, “To find creative juices at the spring, We have to reinvent all that we bring.”  The second poem, “Did Jesus Know?” relates to Leonardo Da Vinci’s “Last Supper,” and asks the question “did Jesus know just who he dined with that night?”  The last line ends with, “Of course He knew what lay ahead.”

HALEY HARDIN read four pages from chapter two of her novel, Bad Habits and Dangerous Secrets of Cath Evans.  This chapter tells of Cath getting ready to go camping with her friend Lillian.  As they approach their normal camping site Cath realizes that they are going to a different place, and that her friend seems to suddenly be preoccupied.

REBECCA JUERGENS brought two pages from chapter 22 of her novel, In Angelic Arms.  This part of the story tells of a woman entering a hospital desperately looking for her friend, Evan.   As she enters the elevator to go to the surgical floor the overhead light began to flicker and goes dark.  After trying to hit all the buttons on the elevator she ends up on the fifth floor, telling herself that all the growls and accompanying noises she heard were just her imagination.

DIANE STRATTON read three pages of her true short story entitled, “The Music Box.”  The story tells of Diane’s close friendship with Angelika since Junior High and their lives being separated after her friend moved away.  When her friend comes back to her mother-in-law’s funeral  their attention is drawn to the sound of a music box playing, a gift to Angelika from Diane.  The music box lid was closed with no one around it.  Diane felt it was possibly a message from the mother-in-law saying she was O.K.

BOB PHILPOT read four pages of Chapter 10 from his novel, Strange Friends. This part of the story begins with Zeb expecting his friend, Frank, to arrive as he is packing for his trip back east.  After they finally get around to the reason Frank had called the meeting, Frank tells Zeb his life has changed, Dora was his life now.

AMY BRAILEY read her one page story prompt entitled, “The Afternoon.”  The short story, intended for her students to finish, tells of Phoebe sitting on her porch swing, enjoying the warm weather and the fact that her parents were away from home.  Suddenly she sees a horse in her yard.  As she decides to investigate she notices intricately tiny braids laced throughout the mane.  She ends up getting on the horse.

RACHEL THOMAS brought her one page, Book 1: One Kindness at a Time Series entitled, “The Blue Pencil.” This 22-stanza poem tells of Johnny going to his first day of school with his gift from grandpa, a blue pencil.  After his teacher tells of some pupils not able to write because they did not have any supplies, such as pencils and books, Johnny decides he knows how to help and gives up his pencil.