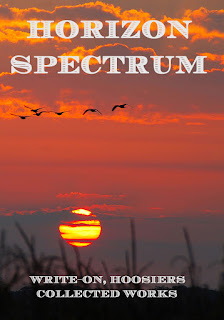 A vote of approval for the September 15, 2016 minutes was first given by BEVERLY STANISLAWSKI and seconded by CAREN VON SEE.

SHARON PALMERI discussed the Write-on, Hoosiers annual  banquet on Wed Dec 7.  She informed the members that there would be book sales and entertainment.  Other writing group members may also be attending, such as, Blank Slate, Magic Hour and the Lowell Poetry Group. Other group members are also welcome.

GAIL GALVAN brought Write-on, Hoosiers  soon to be published book, Horizon Spectrum, to the meeting for members to take a "sneak peek." [see cover above] The book, which is nearly 300 pages, includes  include stories, poems, memoirs, and a special section celebrating Indiana's 200th anniversary. The final publication will be unveiled at our annual banquet. Members may pick- up their pre-orders at that time as well.

KATHERINE FLOTZ mentioned an upcoming event at the Merrillville Public Library entitled Calling All Authors.  The event will take place on Saturday, December 3rd from 1:00 to 4:00 P.M.  Authors will be able to sell their books and can reserve a table for $25 or $15, depending on the placement, by calling Cindy at 769-3541, ext. 335.

HARDARSHAN VALIA mentioned how much he had enjoyed GAIL GALVAN’S link to  “ Clip Art,” at www.clker.com .

JACKIE HUPPENTHAL brought her very cute short poem entitled, “Dear Mr. John.”  The poem, written for the retiring attendant at her son’s school, told of how much the school would miss him and was accompanied with a picture frame surrounded with various articles he had dealt with.

MARILYN KESSLER read her two-page article entitled, “The Painting Project.”  The article told of the difficulty in painting a room, especially one that held so many things pertaining to her work place and other fond memorable items.

HARDARSHAN VALIA  brought his seven stanza poem entitled, “Old Man and the Mango Stick.”  The poem began with a fallen mango tree and an old man passing by who pulled off a branch to use for his walks.  The stick was always with him from that day and in the end was used on his funeral pyre.

DAVE WILGUS read three pages from his short story entitled, “The Curse is Over.”  This story pertained to the Chicago Cubs and the World Champtionship of baseball and the “curse” that was placed on them when the owner of a tavern, Billy Sianis, was asked to leave the stadium with his pet goat.  Dave is convinced that this year will break that curse.

MIKE MUSAK brought his four-page short story entitled, “A Good Deal.”  The story began at a car dealership with a conversation between the owner and a receptionist that worked for him.  The receptionist could not understand how her boss would want to help his competitor by sending some of his potential business to him.

SHARON BUCKMAN read four pages of her sequel, Beyond the Canopy.  In this chapter Harold finds his father missing and tries to tell the police he does not know of his whereabouts.  After the police tell him to try to bring his father in to the station he heads for his friend’s house, only to find another surprise waiting for him.

BEVERLY STANISLAWSKI read her five-stanza poem entitled, “Lonely Suitors.”  The poem told of a lonely loon “piercing the stillness” with his longing call waiting for a response that never came.  The beautiful poem ended with the loon, and his never found mate, continuing to lived their solitary existence.